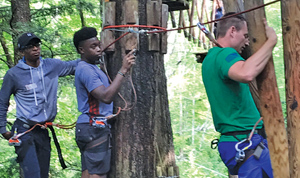 This summer I had the opportunity to travel to Brant Lake Camp with New Flex Youth Program. We started the trip off at the Adirondack Extreme Adventure Course. This set the stage for the weekend. At the ropes course we all learned the power of team work. Kids were getting over fears and then turning around and helping the next kid in line to get them through the obstacle. Back at camp we broke into teams and played the largest kickball game that I’ve ever been a part of! It was great to see everyone just having so much fun.

The next day we carried over the teamwork theme, breaking up into groups and working on skills for different games. I was working with Danny and my girlfriend, Nicole, on soccer for the first breakout group. After watching Danny run the first group he threw us out on our own and had us run the second group. Having never played soccer, I was a little worried, but being involved in sports throughout my entire life, most things translate. We had a blast! A couple of the kids and I even worked on our handstands during a quick break. We finished the day off with a swim in the lake and it was a great way to cool off. We left Saturday to head back downstate, but the opportunity to participate in this event was perfect. It was a great way to end the summer.

More from our Blog

You can also check out our
Blog by clicking here.